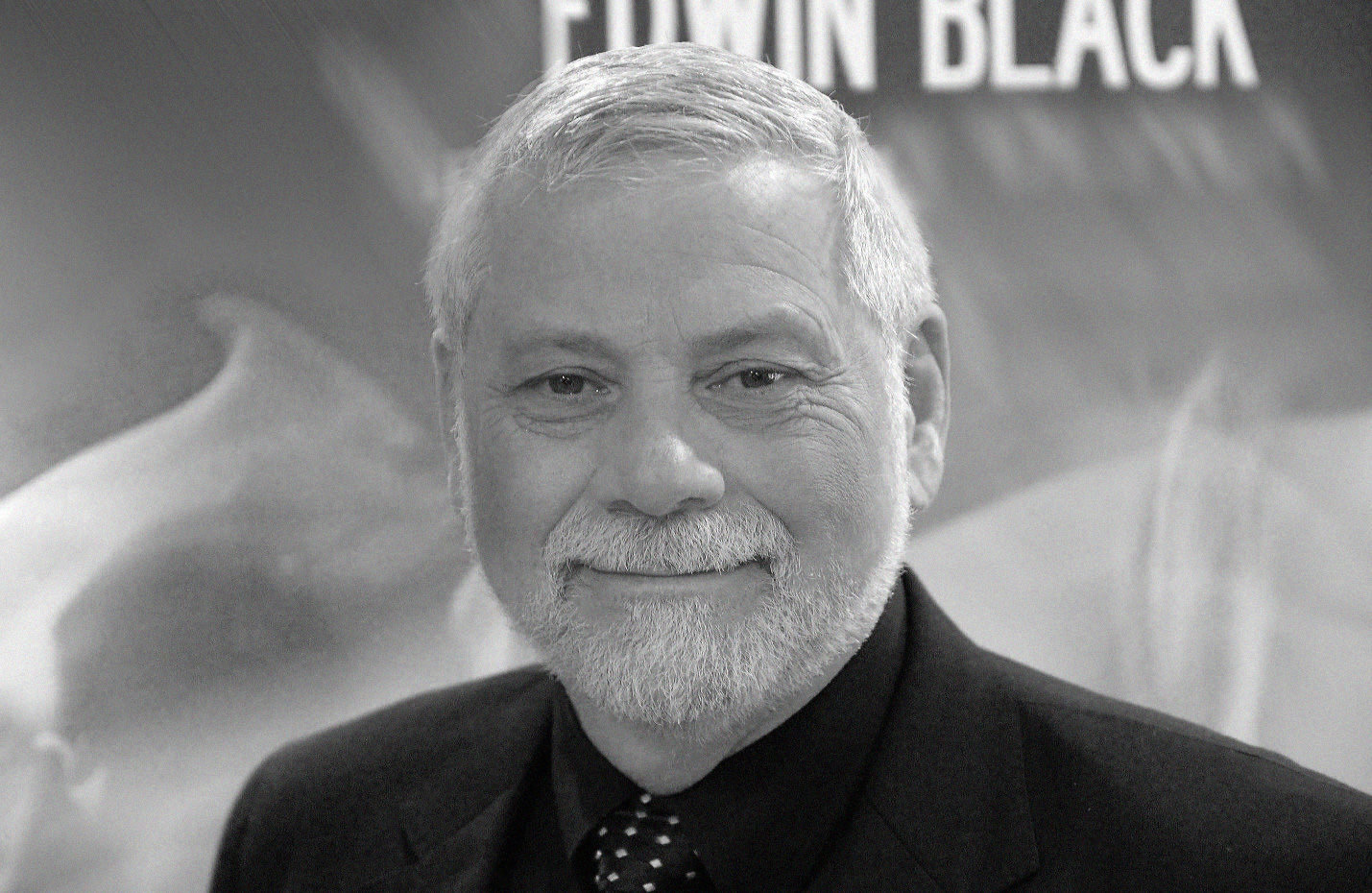 Edwin Black is the award-winning, New York Times bestselling international investigative author of 200 award-winning editions in 20 languages in 190 countries, as well as scores of newspaper and magazine articles in the leading publications of the United States, Europe and Israel. Since 2020, he has hosted the weekly issues-oriented and history-based The Edwin Black Show, found at https://www.TheEdwinBlackShow.com with its companion YouTube Channel at https://www.youtube.com/c/theedwinblackshow which hosts edited and visually documented episodes plus trailers and bonus features.

With more than 2.2 million books in print, for a half century, his work has focused on human rights, genocide, organized hate, corporate criminality and corruption, governmental misconduct, academic fraud, philanthropic abuse, oil addiction, alternative energy, and historical investigation. Editors have submitted Black’s work fourteen times for Pulitzer Prize nomination, and, in recent years, he has been the recipient of a series of top editorial awards and nominations. He has also contributed to a number of noted anthologies worldwide. For his human rights investigations, Black has been interviewed on hundreds of network broadcasts from Oprah, the Today Show, CNN Wolf Blitzer Reports, and NBC Dateline in the US, to the leading networks of Europe, Latin America, and Israel.

His human rights works have been the subject of numerous documentaries, here and abroad. Many of his books have been optioned by Hollywood for film, with two in active production. Black’s speaking tours include hundreds of events in dozens of cities each year, appearing at prestigious venues from the Library of Congress in Washington, DC, and Harvard University in Cambridge MA, to the United Nations in New York, to the Simon Wiesenthal Center in Los Angeles; and in Europe from London’s British War Museum and Amsterdam’s Institute for War Documentation to Munich’s Carl Orff Hall. He has appeared to speak, lecture, or testify on a variety of social justice issues numerous times in various legislatures such as the US House of Representatives, North Carolina General Assembly, the European Parliament, the Australian Parliament, the Canadian House of Commons and Israel's Knesset. In February and early March 2014, Black appeared before four parliaments in four weeks: The British House of Commons in London, the European Parliament in Brussels, the Israeli Knesset in Jerusalem, and finally before the US House of Representatives Foreign Affairs Committee in Washington, DC.

Black’s eleven award-winning and bestselling books are IBM and the Holocaust (2001 and 2012), Financing the Flames (2013), British Petroleum and the Redline Agreement (2011), The Farhud (2010), Nazi Nexus (2009), The Plan (2008), Internal Combustion (2006), Banking on Baghdad (2003), War Against the Weak (2003 and 2012), The Transfer Agreement (1984 and 2009), and a 1999 novel, Format C:. His enterprise and investigative writings have appeared in scores of newspapers from the Washington Post, Los Angeles Times and Chicago Tribune to the Sunday Times of London, Frankfurter Zeitung and the Jerusalem Post, as well as scores of magazines as diverse as Playboy, Sports Illustrated, Reform Judaism, Der Spiegel, L’Express, Business Week and the American Bar Association Journal. Black’s articles are syndicated worldwide by Feature Group News Service, JNS, and other syndicates.

In 2014, in his bestseller Financing the Flames, Black exposed massive irregularities in taxpayer-enabled NGOs in Israel, including the New Israel Fund, and also revealed the existence of Palestinian Authority salaries for convicted terrorists based calibrated on the severity of their crime--which became known as Pay to Slay. He appeared before several national legislatures to detail his findings. On June 1, 2015, Black proclaimed International Farhud Day at UN Headquarters in a live global UN event, driven by revelations in his book The Farhud. In 2016, Black organized a whirlwind 70th Anniversary Farhud commemoration starting in the House of Representatives in Washington DC, moving to New York, then London and then Jerusalem’s Knesset—all within 5 days. In 2017, Black undertook a 14-event series in Australia, ignited an international campaign to replace the United Nations with a Covenant of Democratic Nations. That same year, 2017, he led a 13-city series across America on the centenary of the Balfour Declaration.

Black has been featured at hundreds of scholar-in-residence programs in the US, Canada, Europe, Australia, and Israel. In November and December 2014, he went on a 45-event Human Rights Tour. In North Carolina, Black appeared nine times in three days, speaking out against the persecution of Yazidis, Shia Muslims, and Christians in Iraq; racial injustice in America and its impact on elections; environmental injustice arising out of oil addiction; journalistic ethics in covering human rights; bias against Jews in Israel; and a health care crisis in the Middle East.

In 2012, Black was featured at scores of speaking events in the United States and overseas, highlighting all his published works. His tour appearances included one before the European Parliament in Brussels about IBM and the Holocaust and modern-day privacy concerns—an issue that continues to raise concerns. That year, special expanded editions of both IBM and the Holocaust and War Against the Weak were published.

In 2011, Black was featured at scores of speaking events in the United States and overseas, highlighting all his published works. His travels included a four-week scholar-in-residence in Australia sponsored by the Shalom Institute ad focusing on his work in petropolitics (a term that Black coined) and Holocaust history. He was also asked to deliver a week-long 5-campus scholar-in-residence in North Carolina sponsored by a coalition of that state’s universities, legislators, civic institutions, and other leadership groups, exploring the dark side of eugenics, this arising from his bestseller War Against the Weak. The North Carolina tour was marked by several standing-room only appearances. Black's work helped spearhead the successful crusade for eugenic reparations paid by the state of North Carolina.

In 2010, the American Association of People with Disabilities (AAPD), in a Capitol Hill ceremony, bestowed its coveted “Justice for All” on Black for his work on eugenics and his book War Against the Weak. In 2008, the American Jewish Press Association gave Black its Rockower Award for best investigative article of the year, arising from the series "Hitler’s Carmaker," syndicated internationally by the JTA.

In 2005, Black won the World Affairs Council’s award for the Best World Affairs Book for Banking on Baghdad, and the Doña Gracia Medal for Best Book of The Year. In 2004, he won the coveted Rockower First Prize for Investigative Journalism from the American Jewish Press Association for “Funding Hate,” his acclaimed syndicated investigation of the Ford Foundation’s systematic funding of hate groups.

In 2003, he received the top two editorial awards from the American Society of Journalists and Authors: Best Book of the Year for IBM and the Holocaust and Best Article of the Year for “IBM in Auschwitz,” published in the Village Voice. Also in 2003, Black received the International Human Rights Award from the World Affairs Council for War Against the Weak.

In addition, Black received the Chicago Public Library's "Carl Sandburg Award" for The Transfer Agreement, as well as two Folio Awards and a Computer Press Association Award for excellence in magazine publishing. The author has received two honors for moral leadership: "The Moral Courage Award" from a consortium of human rights organizations and agencies led by San Diego State University, and the "Moral Compass" from the Southwest Florida Holocaust Museum in Naples.